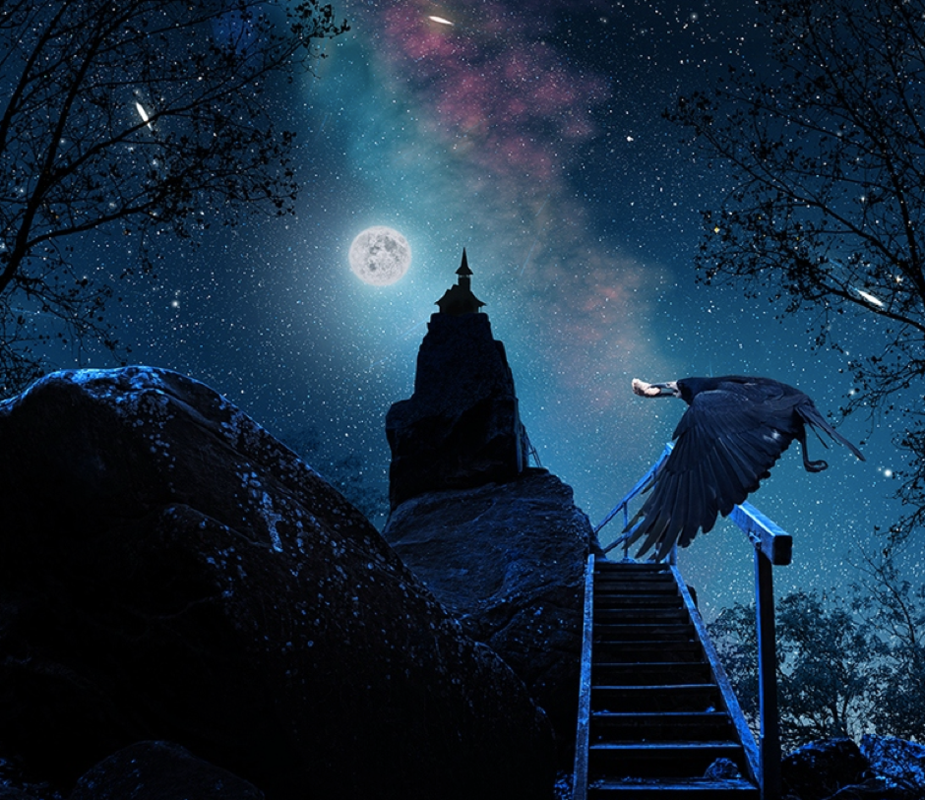 If you were Lucy, would you investigate the tower or go back home?

Why do you think lots of scary stories are set at night?

What’s the difference between a silhouette and a shadow?

Are stars and the moon sources of light? Do they light up the night?

Imagine what one of the rooms inside the tower looks like. Draw or write down what you have imagined.

The night was still. Not a breath of wind could be felt. An eerie silence filled the warm evening air, broken only by the sound of the crow’s wings flapping as it returned to its nest with food.

Combined with the ghostly silhouette of the tower and the rickety pathway that led to it, the ominous silence made Lucy nervous. She felt a prickle on the back of her neck as she thought about what she might find inside the tower, and what might be lurking in the darkness around her.

Her heart began to thump inside her chest, seemingly matching the beat of the crow’s wings.

Lucy had always been slightly wary of crows; they had sooty, black wings, piercingly sharp beaks and menacing, staring eyes. The crow had settled down in one of the gnarled branches of a nearby tree. She thought it was watching her. Surely it wasn’t though? Crows didn’t do that. It must have been her imagination.

Plucking up all of her courage, she approached the stairs. They looked rotten and crumbling, as if nobody had set foot on them for years and years. The crow was still staring at her, and had tilted its head to one side as if pointing its beak towards the tower. “What was this crow up to?” she thought to herself.

Her eyes left the crow and she ascended the first few steps on the rickety path towards the tower. “It’s just a silly bird.” Lucy muttered to herself under her breath. “Don’t be such a wimp.”

The crow watched as she left, and smiled. A wicked, cruel smile accompanied by a cackling laugh. “Silly, silly girl” it squawked. “I must tell the others she is coming.”

The crow took off into the night…

Can you continue Lucy’s story as she visits the Forbidden Tower? Where was the crow going? What would Lucy find inside?

Can you include a complex sentence containing a main clause and a subordinate clause?

e.g. This had once been a happy place, but now everything had changed.

The crow flew across the sky. It had wings and a beak.