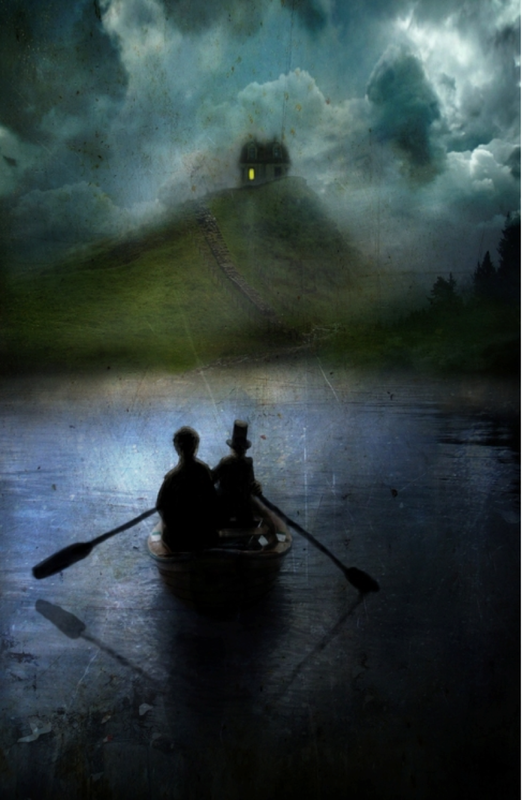 Who do you think these two figures are?

Do they have good, evil or mischievous intentions?

What are they in such a hurry to do?

What do you think is going on at the house?

Why is there a light on?

Why do you think the characters are surprised to see the light?

In the picture you can only see the backs of the two characters in the boat. Could you draw or describe what you imagine them to look like in the daylight?

They knew what had to be done. Time was of the essence.

Quietly placing their oars in the water so as not to make a sound, the two dark figures inched their way across the moonlit lake. Far away on the horizon they could see it…their objective. They had to reach the house. They had to remain undetected.

To their surprise, a light flickered on in one of the rooms. Was someone there? They were told it would be empty. They were told they would be alone. They saw a silhouette pass the glowing window. Who on earth was it? They exchanged an anxious glance. The one in the top hat cursed under his breath. The one with the curly hair shrugged. Beginning to panic, the pair began to paddle faster, oblivious to the splashing sound they were now making.

It did not matter. Time was running out! They only had a matter of minutes…

Can you place the missing bracket in the sentence below?

The boat (which was made out of wood couldn’t travel very quickly.

These sentences are sick and need your help to get better!

They rowed across the lake. There were clouds above them in the sky. A light shone in the distance.