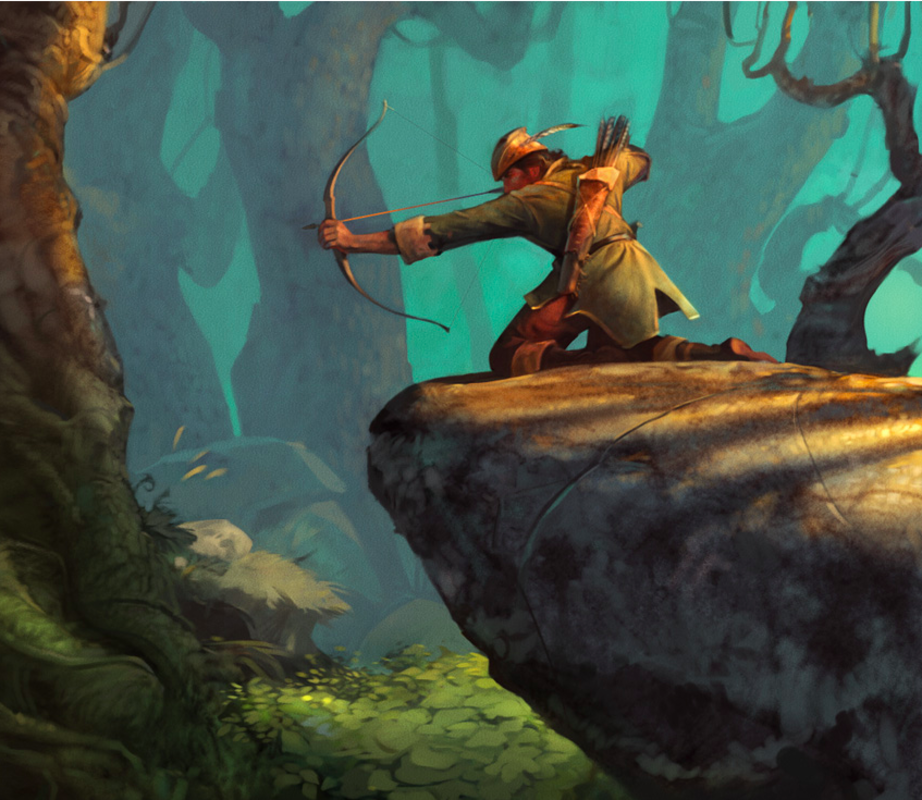 Have you ever seen a medieval longbow? Why do you think it is so difficult to draw the bow?

What is a bowyer?

Why do you think archers often chose wood from a yew tree for their bows?

What might have caused the rustle in the bushes?

Why is Robin alone in the woods?

Can you recall the story of Robin Hood?

Which other characters do you know?

Can you think of any other skills that require lots of practise, like being an archer?

Can you research and then draw a medieval longbowman?

Think carefully about his clothes and weapons. You could even write some instructions about how to fire a longbow!

Robin exhaled slowly. As an archer, this final exhalation, almost a ritual, was the calm before the storm; the final moment before releasing the arrow and wreaking havoc on its target.

Like all bowman, Robin was as strong as an ox. Daily training had seen to that. Hours upon hours of drawing back the beautifully curved yew bow had thickened Robin’s muscles like hempen rope, to the point where he could now draw the massive bow with ease.

The thousands of arrows that he had loosed since the age of 6, when he had been given his first bow, made Robin a professional, and like his ancestors, a bowman of his skill didn’t miss. The yew bow was so familiar that it was like an extension of his body; when it was not in his hands he didn’t feel alive.

He was the bow. The bow was him.

He didn’t need to aim; all he had to do was glance at his target and he knew the missile would find its mark.

Similes are a great way to describe one object by comparing it to another.

Can you find any similes in the story starter?

Can you attempt to use similes to describe something the picture?

Robin crouched on the rock. Robin drew an arrow from the quiver and put it on the string. Robin drew the bow. He was strong.