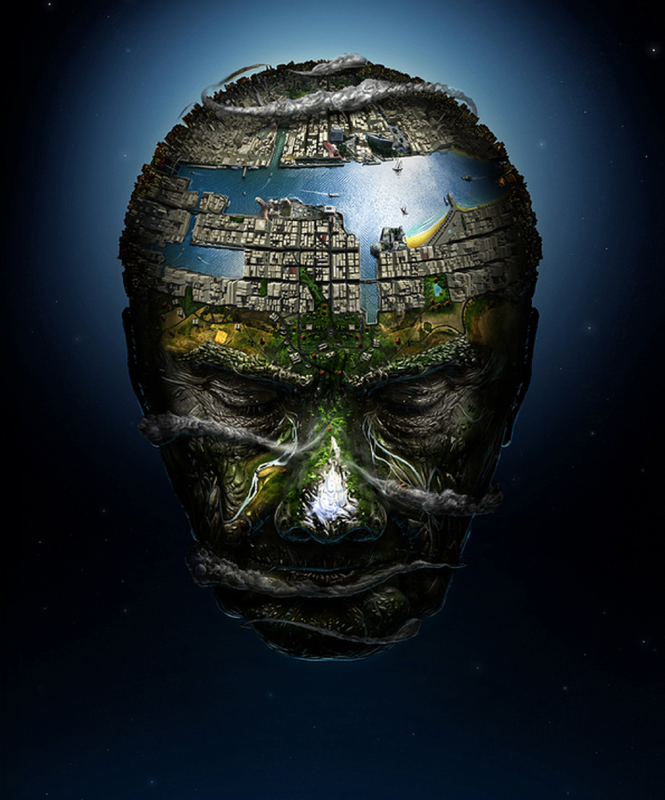 If you chose to live on one part of the Head, where would it be?

If this was where we lived, what would happen when the Head awoke?

What do you think would be inside his mouth and eyes?

What do you think is causing the light around him?

Do you think there is a reason why the artist has created such a strange and abstract image?

Is there a deeper meaning behind it?

Imagine what the back of his head looks like. Can you draw or describe what you have imagined?

Alternatively, you could design your own version of the Head of the World.

He was the World.

His forehead was a mighty river flowing across his brow.

His eyes were like deep canyons; colossal gouges chiselled from his rocky face.

His tears were waterfalls cascading down his grassy cheeks.

He was the World.

Can you continue the poem? Can you think of come of your own similes and metaphors to use?

Can you identify all of the similes and metaphors in my short poem?

Can you think of your own similes and metaphors and create your own poem?

These similes and metaphors are ‘sick’ and need help to get better. Can you help?

His nose was like a mountain. His eyes were like valleys. His forehead was a city. His eyebrows were walls.